7 May 2019: The Schutzverband Nürnberger Bratwürste e.V. (Nuremberg Sausage Protection Association) is in the starting line-up once again in 2019 when the Franconian Bratwurst Summit opens for the 9th time at 11 am on 2 June 2019 in Pegnitz and for a whole day, it’s all about the sausage. New this year is the Nürnberger Bratwürste information pavilion. 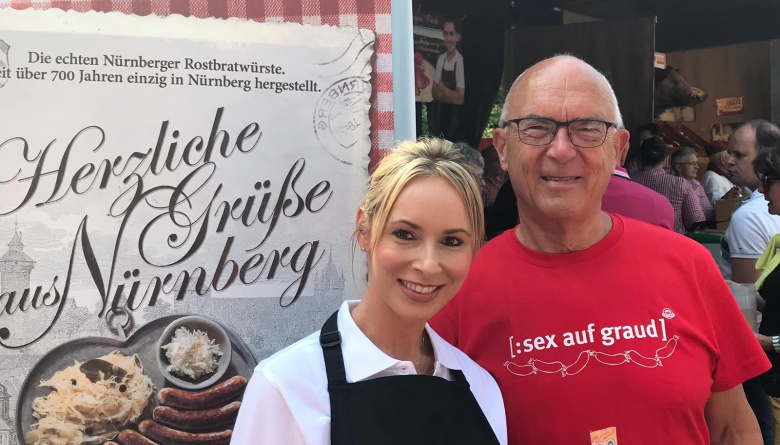 The extra presentation booth is to demonstrate to interested Bratwurst visitors how much craftsmanship goes into the 9 cm-long Nürnberger Bratwurst.“The event in Pegnitz showcases the tradition and modernity of the wide range of Bratwurst sausages from Franconia. We can be proud of the craftsmanship of the Franconian butchers. The Nürnberger Bratwürste are part of this culinary heritage, and it is therefore a matter close to our heart to present the Nürnberger Bratwürste at the Bratwurst Summit this year too,” stresses Dr. Rainer Heimler, 1st Chairperson of the Nuremberg Sausage Protection Association. This year, the Association will operate an information pavilion and a butcher’s stand for the first time, booth numbers 6 and 7.

The Nuremberg Sausage Protection Association, which is made up of industrial producers and the Butchers’ Guild of Middle Franconia-Central, in which approximately 30 Nuremberg butchers are represented, actively advocates for the protection and awareness of the Nürnberger Bratwurst. “The craftsmanship of the Nuremberg butcher has been responsible for the little Bratwurst since the Middle Ages. The Nürnberger Bratwürste are documented for the first time in the Nuremberg City Council statutes of 1313/1314, in which it states, “all pork loins should be finely chopped and put into the sausages”, and we still do this today,” explains Nina Weiss, 2nd Chairperson and qualified master butcher.

At the butchers’ stand, visitors to the Bratwurst Summit can taste the fresh Nürnberger Bratwürste traditionally served in the famous “3 im Weckla” (three sausages in a bread roll). Representing the butcher’s trade is senior master Konrad Ammon. Together with his fellow Nuremberg butchers, he will prepare the Bratwürste on the barbecue. In the adjacent information tent, there are interesting facts and curiosities to discover. The young visitors are also catered for. An art corner encourages children to make artwork featuring the little Bratwurst. In a photo booth, visitors can have a souvenir picture taken to take with them.

The Association will not take part in the competition. “The recipe and size of the Nürnberger Bratwurst has been specified since its beginnings, and in 2003 was distinguished with the European protected geographical indication (PGI) label. As the first Bratwurst in the world, we thus obtained the rights to a protected traditional speciality. For this reason, we proudly adhere to the composition of the Bratwurst and only offer visitors the traditional sausage they love,” adds Dr. Rainer Heimler.

Only the best, coarsely trimmed pork is used to manufacture the Nürnberger Bratwurst, which is then refined with the typical marjoram seasoning and filled into 9 cm sheep casings.

The Protection Association and its members

Since the Association was founded in 1989, along with its members, it ensures the genuine quality and taste of the little delicacy from its home town. The manufacturing tradition and recipe of the Nürnberger have been registered under the EU protected geographical indication (PGI) label since 15 July 2003. This tradition of manufacturing Nürnberger Rostbratwürste (PGI) is continued at both artisan and industrial level. Approximately 30 butcher’s shops in Nuremberg, represented by the Butchers’ Guild of Middle Franconia-Central, grind the fine speciality for their deli counters.

Vacuum-packed, the Nürnberger Bratwürste leave the companies of manufacturers Schlütter’s Echte, Kupfer, HoWe and Wolf Wurst, who all produce Nürnberger Rostbratwürste in Nuremberg according to the specified recipe only, with a fine hint of marjoram.

The city of Nuremberg is a founding member of the Protection Association and has always supported the interests of the Nürnberger Bratwurst.

The Nuremberg Sausage Protection Association has two key tasks: On the one hand, it makes sure that Bratwurst sausages called “Nürnberger” do actually come from Nuremberg and that the quality, the recipe and all the typical characteristics are maintained. On the other hand, the Association undertakes brand management and works on building brand awareness.