The history of the Nuremberg Sausages

The history of Nuremberg roast sausages began in the shadows of the steeples of St. Sebaldus church. In 1313, a chapel known as Moritzkapelle was built in the church courtyard for the poor, and soon thereafter “the cooking at St. Sebaldus” became known for stilling the hunger of the poor with its “little blue bell.” The peculiar connection between nourishment of the body and soul achieved such great success that the inn that was built next to Moritzkapelle and
the food served there made this establishment, known as Bratwurst Glöcklein (“Little-bell sausages”), Germany’s most renowned inn of the time.

Neither the inn nor the chapel were rebuilt after being destroyed by Allied bombing in World War II. The only remaining trace of them is an outline of their original location that has been traced in the ground.
And yet when it comes to Nuremberg Bratwürste, there is much to learn and much enjoyment to be had throughout Nuremberg. For example, wine market, Schulgässchen and Winklerstraße once formed the gastronomic hub of what was in any case the Holy Roman Empire city with the largest number of inns: one out of every eight buildings was in fact an inn. Butchers plied their trade in pile structures that were built on the Pegnitz River – which is where the waste products of animal butchering were thrown. This gave rise to an expression in the downstream city of Fürth: “Don’t expect anything good to come from Nuremberg.”

Unschlitthaus on the other side of the Pegnitz river at one time housed the Fleisch- und Bratwurstamt (Meat and sausage bureau). Nearby Mühlgasse brings to mind the squealing of the pigs that were bred at Almosenmühle
– which is presumably why Hutergasse used to be called Stinkende Gasse (Smelly Street). 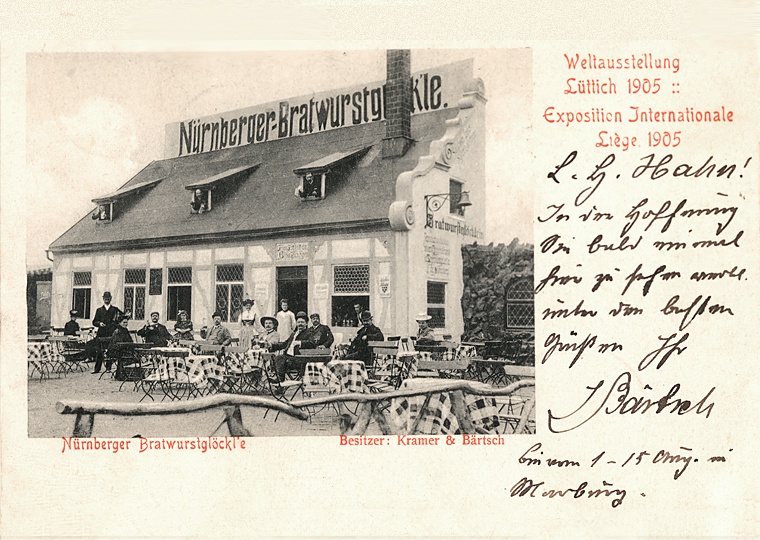 The historical record contains evidence, dating back to as early as the 14th century, concerning Nuremberg’s exacting tradition of bratwurst quality. Only specialized pork butchers were allowed to make Nuremberg Bratwürste, and were daily required to prove their sausage-making acumen to an official butcher’s council that was part of a guild of specialized market merchants. This council strictly enforced adherence to recipes, as well as sausage texture, the meat that was used in the sausage, and its moisture content. If the quality of a butcher’s bratwurst was found to be lacking, it was unceremoniously thrown into the Pegnitz river.

But it was not only the high standards that were set for butchers that made Nuremberg sausages so special. As Nuremberg was a major trading center, its citizens placed great importance on taste and quality: they wanted their city’s bratwurst to be unique, highly refined, and superbly seasoned. This is how Nuremberg sausages acquired its marjoram flavor, which is still one of its most notable attributes today.

The traditionally diminutive size of Nuremberg bratwurst may has been the result of meat and vegetable price increases, which in the latter half of the 16th century resulted in Nuremberg’s high-quality bratwurst being priced out of the market. This prompted the inventive Nurembergians to simply make their bratwurst smaller, thus enabling them – in keeping with the principle of quality over quantity – to increase their unit sales and generate higher per-kilogram revenue.

Long ago one of Nuremberg's trade marks

Nuremberg sausages has gained an outstanding reputation far beyond the confines of the Nuremberg region – and not only during the outdoor-barbecuing season. Since August 2003, “Nürnberger Rostbratwürste” (Nuremberg roast sausagse) has been an EU protected geographical indication (PGI mark). This mark guarantees that all sausages bearing the name “Nürnberger Rostbratwürste” are manufactured in the Nuremberg region according to specific recipes.

This makes Nuremberg sausages the world’s first sausage to have been granted the status of a protected specialty from a specific geographical region.