Three years of "WeltGenussErbe Bayern": The Bavarian imitative is extremely pleased with its provision of information on food products registered as Protected Designation of Origin European cuisine is known for its variety of culinary specialities. Whether champagne from France, Parma ham from Italy or Feta from Greece, many products including many from Germany are closely affiliated with a particular region as far as a recipe tradition and ingredients are concerned and are therefore universally unique. That such region-specific products are unique was recognised by the EU in 1992 which began to award EU labels of origin as identifying logos for particular products. From September 2010 to August 2013 the initiative "WeltGenussErbe Bayern" successfully provided information on EU labels of origin using the example of specialities from Bavaria.

What does "origin" refer to?

After a thorough examination, the EU awards the "protected designation of origin" (PDO) or the "protected geographical indication" (PGI) to protect products with a particular origin and a native region from imitation and to help consumers identify genuine, regional specialities in retail stores. Germany currently has 91 EU-protected products. Most of them come from Bavaria and include delicacies such as Allgäuer Bergkäse, Allgäuer Emmentaler, Bayerisches Bier, Nürnberger Rostbratwürste and Bayerischer Meerrettich.
Anyone, for example, who puts Allgäuer Bergkäse or Allgäuer Emmentaler bearing the red-yellow seal of "protected designation of origin" in their shopping basket can rest assured: Both cheese have been exclusively produced, processed and manufactured in the specified region using ingredients from the region. Bayerisches Bier, Nürnberger Rostbratwürste and Bayerischer Meerrettich are produced true to a traditional, special recipe and by craftsmanship native to the specified region. That is why they have been awarded the blue-yellow seal of "protected geographical indication".

Although the two labels of origin were already introduced in 1992, both were relatively unknown among consumers and not least by the trade press for quite some time. It was because of this that several Bavarian protective associations for foodstuffs launched "WeltGenussErbe Bayern" in autumn 2010. The initiative is supported by the EU, the Bavarian State Ministry for Food, Agriculture and Forestry as well as the associations concerned. Stated objective: To improve knowledge about the EU labels of origin and increase awareness of Bavarian specialities covered by the Protected Designation of Origin.

Bavaria currently has a total of 26 protected specialities, a further 15 are applying for protected status. Five of the Bavarian delicacies already protected come under the umbrella of WeltGenussErbe. "The WeltGenussErbe Bayern project represents an important step in raising the profile of Bavaria as a land of specialities. The joint initiative of the Bavarian Ministry for Food, Agriculture and Forestry and the protective associations have made a major contribution to promoting the competitiveness of originals such as Allgäuer Emmentaler und Allgäuer Bergkäse, Bayerisches Bier, Nürnberger Bratwürste and Bayerischer Meerrettich on the national and international markets", enthuses Helmut Brunner, Bavarian Minister of State for Food, Agriculture and Forestry regarding their commitment.

The core message of WeltGenussErbe Bayern encourages consumers to keep a closer eye out for PGI and PDO products in the future. This statement is made by those familiar and unfamiliar with the initiative. That is the result of a current study. In other words, consumers trust in the value of EU labels of origin. Both "PGI" and "PDO" are considered useful in obtain sound knowledge about the safety, quality and regional origins of the products.

An additional positive result of the study: The level of awareness of EU labels of origin which increased significantly in 2013 correlates positively with the Bavarian gourmet initiative. "WeltGenussErbe Bayern" which was launched in 2010 has, since its inception, made a name for itself among 30% of interviewees in Bavaria and is automatically associated with specialities whose origins are protected. In 2010 only less than 10% of interviewees recognised "PGI" and "PDO"; in the spring of 2013 20% of interviewees were able to correctly decipher the abbreviation "PDO" and 23% the abbreviation "PGI". Upon presentation of the red-yellow and blue-yellow label, 26% were able to identify the first sign and 28% the second sign. (Source: facit research, April 2013).

Emmerich Heilinger (engineer), Managing Director of Milchwirtschaftlichen Verein Allgäu-Schwaben e. V. is convinced that the commitment of the protective associations to "WeltGenussErbeBayern" will not only pay off in terms of raising the profile of Bavaria as a land of specialities, but also help the sales of regional delicacies in the longer term:" The consumer learns from practical examples and in a simple way all there is to know about traditional specialities. The consumer is more aware when shopping and makes a conscious decision to buy high-quality food whose origins can be identified due to the EU label of origin".

By 2015 it can be assumed that there will be roughly 40 protected indications in Bavaria due to the increased provision of information by the "WeltGenussErbe Bayern" initiative, which will account for revenue of about EUR 3 billion, representing a sixth of total revenue of the food manufacturing industry. This, however, requires continuous positive and dynamic developments when it comes to the registration of Bavarian quality products. "The use of the European protection system may make a considerable contribution to an improvement in value creation and revenue in the Bavarian agricultural and food industries in the medium term", reaffirms Dr. Adriano Profeta of KErn - Centre of Food Excellence in Weihenstephan.

Confidence is good, controls are better

Consumers can rely on the controls for EU-labelled foodstuffs. They take place as an added extra and independently of official food control and are performed by certified certification bodies such as the LACON Institute. The food properties of the labelled specialities are controlled using product-specific checklists.
The WeltGenussErbe Bayern initiative funded by the European union is supported by the Bavarian State Ministry for Nutrition, Agriculture and Forestry, by the State Association for Bavarian Dairy Farming, Milchwirtschaftlicher Verein Allgäu-Schwaben e.V., Bayerischer Brauerbund e.V., Schutzverband Nürnberger Rostbratwürste e.V., and Schutzgemeinschaft Bayerischer Meerrettich. 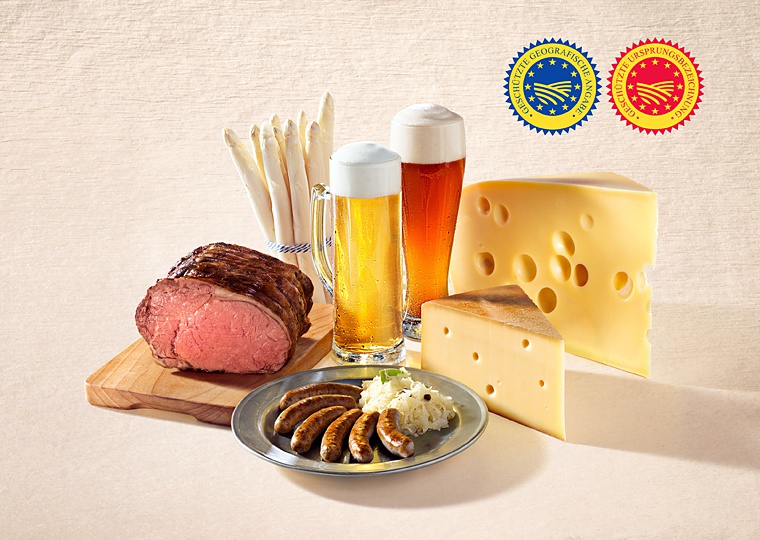 WeltGenussErbe Bayern – because the most genuine taste is the best.

The information campaign funded by the European Union WeltGenussErbe Bayern illustrates precisely what the EU labels of origin "PGI" and "PDO" stand for, how they protect producers and manufacturers and why they benefit consumers.
The information offensive will run until 2017. It is supported by the Bavarian State Ministry for Food, Agriculture and Forestry, by the State Association for Bavarian Dairy Farming, Milchwirtschaftlicher Verein Allgäu-Schwaben e.V., Bayerischer Brauerbund e.V., Schutzverband Nürnberger Rostbratwürste e.V., Erzeugergemeinschaft Abensberger Qualitätsspargel e.V., Spargelerzeugerverband Südbayern e.V. and Landwirtschaftliche Qualitätssicherung Bayern GmbH. Further information is available at: www.weltgenusserbe.eu