“For you should know,  that where Hans Sachs once ate, I too have eaten small  sausages,” Nuremberg campaigner for women’s rights and author Helene von Forster (1859–1923) 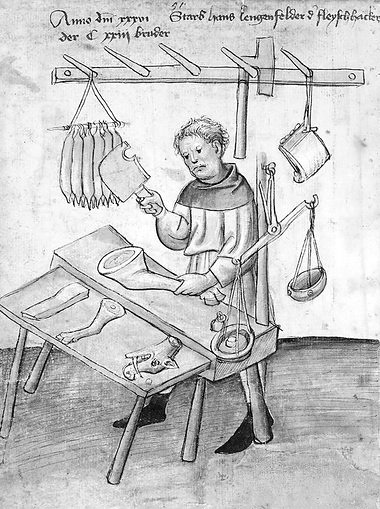 Portrait of the butcher Hans Langenfelder, who died in 1436. The butcher is shown chopping up a joint of pork.
In the background you can see large sausages attached to a hooked rod.

Over 700 years of tradition

Why is the Nuremberg Rostbratwurst so small? It is just 7 to 9 centimetres in length, weighing no more than 25 grams. These are probably unusual measurements for a sausage! The reasons for the invention of this little delicacy probably go back centuries.

In the year 1313 the Moritz Chapel was built next to the sublime St Sebald’s Church near the main central market and the Town Hall. A few years later there were reports of the “cooks at St Sebald’s “ to which the needy were summoned to be given food by the sounding of the “little blue bell.” The most famous tavern in Germany, the Bratwurst Glöcklein or Little Sausage Bell grew out of the tavern and cook shop which adjoined the St Moritz Chapel. 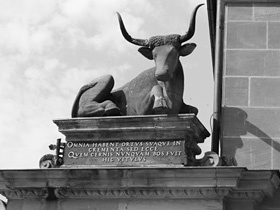 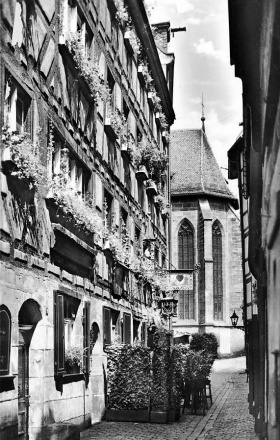 This little restaurant, together with the whole city and of course its famous sausages, have survived times when they were visited by emperors and kings as well as those when there was shortage of meat and wars. The Nuremberg sausage successfully adapted to any conditions in order to ultimately become probably the most famous sausage in the world. Follow the history of this famous little delicacy through the centuries.