The size of the Nuremberg sausages

About the diminutive size of Nuremberg sausages

Nuremberg sausages is nothing if not small: it measures a mere 7 to 9 centimeters in length, and weighs no more than 25 grams. These are unusually low figures for bratwurst, to say the least. Standard pork bratwurst is at least 18 centimeters long, and weighs between 90 and 110 grams.

The real story of how and why these small delicacies were invented undoubtedly lies in the distant past. The historical record contains evidence, dating back to the early 14th century, concerning Nuremberg’s exacting tradition of bratwurst quality. Only specialized pork butchers were allowed to make Nuremberg sausages, and were daily required to prove their sausage-making acumen to an official butcher’s council that was part of a guild of specialized market merchants. This council strictly enforced adherence to recipes, as well as sausage texture, the meat that was used in the sausage, and its moisture content. If the quality of a butcher’s bratwurst was found to be lacking, it was unceremoniously thrown into the Pegnitz river.

During the latter half of the 16th century, this superior-quality sausage became economically unviable owing to price pressure. This situation prompted the inventive Nurembergians to make their bratwurst smaller, thus enabling them to increase their unit sales and generate 600% higher per-kilogram revenue than had heretofore been the case. A special measuring fork was developed to measure bratwurst length.

And even today, Hartmut Frommer, a senior executive of Schutzverband Nürnberger Bratwürste e.V. takes great pleasure in using this special fork to bring home the diminutive size of Nuremberg Rostbratwürste. 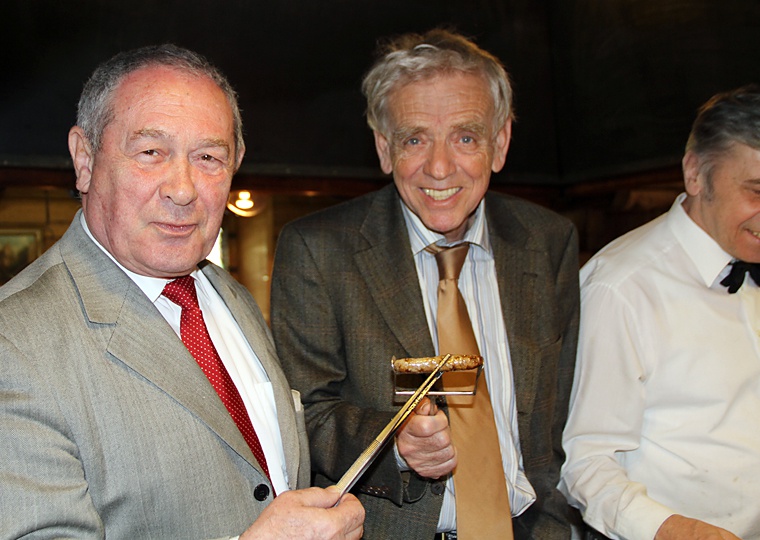 Legends and quaints of the 7 to 9 cm long sausages

A number of charming legends have sprung up that relate how it happened that Nuremberg sausage is such a diminutive sausage.

Legend 1:
Noris, as Nuremberg used to be called, didn’t only have the highest number of inns, but also the smallest ones. Thus the Nurembergians needed to adjust the size of their sausages to the small dimensions of their kitchens and dining rooms.

Legend 2:
Quality control was – and still is – stricter in Nuremberg than anywhere else. Whereas other butchers turned to lower quality ingredients to avoid increasingly high prices, Nuremberg’s butchers insisted on the importance of quality over
quantity. This was also in keeping with the inherent nature of the place: better small and refined than large and worthless.

Legend 3:
In his lonely dungeon, Kaspar Hauser was fed on an exclusively vegetarian diet that turned him into a diehard vegetarian. This aversion could only be overcome in homeopathic doses; and it is to this that the overwhelming success of Nuremberg’s diminutive sausages was initially attributable.

Legend 4:
According to a city council decree from 1540, bratwurst was allowed to undercut the standard weight, provided that the bratwurst was not sold outside of the establishment where it was originally made. Thus the miniaturization of Nuremberg sausages may have resulted from the innkeeper friendly city council’s decree.

Legends 5, 6 and 7:
Why is Nuremberg sausage so small?

Legend 5: So that innkeepers can pass it through a keyhole after a night of drunken revelry

Legend 6: So that people who arrive home after the city gates have been closed can still get some sustenance (likewise passed through a keyhole)

Legend 7: So that prisoners can be fed through holes that they drill in their prison cell walls.

Legend 8:
Hansel and Gretel from Fürth asked the Nuremberg fairy godmother to grant them three wishes. Upon returning home – and before making a decision about their wishes – they wanted to have some fried potatoes. As the potatoes were sizzling in the frying pan, Gretel wished for a thick fried sausage; whereupon it magically appeared in the frying pan, sizzling away with the potatoes. Hans angrily said: may the sausage glue right under your nose. And in the wink of an eye, it was glued there. And so the only wish they could possibly make for their third wish was for the repellent sausage to disappear.