Winners of the Nuremberg Bratwurst Prize

We are especially grateful to the following persons or institutions who have in the past helped us in all matters relating to Nuremberg sausages. 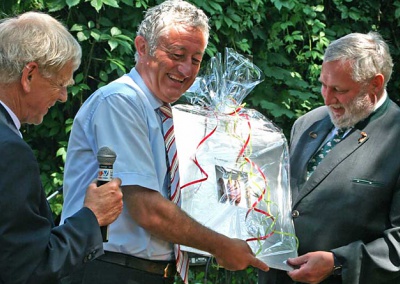 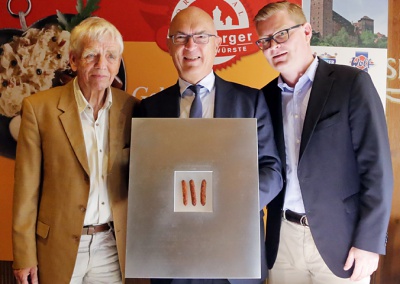 Kerstin Greiner for her article in the Süddeutsche Zeitung newspaper: she sent 22 typical hampers packed full of German specialities all over the world. The Nuremberg Bratwurst emerged as the clear winner amongst competitors such as the Kiel sprat, stuffed cabbages, black pudding, Aachen gingerbread and brawn. The big loser was of all things the Munich veal sausage.

Dr. Franz Fischler: By signing the EC Regulation No 1257 of 15 July 2003, the former Austrian EU Commissioner granted the Nuremberg Bratwurst/Nuremberg grilled Bratwurst – as the world’s first Bratwurst – the rights of a Protected Geographical Indication

Gisela Hellinger: The fourth Bratwurst prize winner is the artist Gisela Hellinger. With her love for sausages, she has managed – sometimes mischievously, more often graciously, but always full of wit – to provide Nuremberg Bratwursts with the place they merit in art. The exhibitions and publications “Die Bratwurst – ein künstlerischer Leckerbissen” (Bratwurst – an artistic and culinary delicacy) provide an eloquent and illustrated testimony of the sausage.

Dr. Hartmut Frommer for his tireless commitment to everything related to the “Nürnberger”.

Werner Behringer for the continuation of the chefs’ tradition at St. Sebaldus Church with the Bratwursthäusle, the Goldenes Posthorn and the Bratwurstglöcklein in the Handwerkerhof (craftsmen’s yard).

1. FCN for the sale of approximately 350,000 Bratwursts per Bundesliga season, which ensures that the “Nürnberger” are not only an important part of every home game for the home supporters, but also are becoming more and more popular nationwide for away fans.

Alfons Schuhbeck is taking our small, tasty Nuremberg Bratwurst with him on his travels to Upper Bavaria and providing people with the complete and delicious recipe using his contacts in radio and television.

The Nuremberg Butchers Guild (Fleischerinnung Nürnberg) is receiving the 10th Bratwurst Prize on behalf of all Nuremberg butchers, because it was the Nuremberg butchers who created the “Nuremberg grilled Bratwurst” and gave it its very specific characteristics – in particular taste and quality. They thus turned it into an unmistakable premium product and at the same time a globally known symbol of the city of Nuremberg, and in such an incredible manner that this has remained the case despite the lack of legal protection over many centuries.

In 2014, the 11th Nuremberg Bratwurst Prize was awarded to Lord Mayor Dr. Ulrich Maly on behalf of all employees of the city, who have constantly been promoting the interests of the Nuremberg Bratwurst and not least campaigning to achieve European protection.